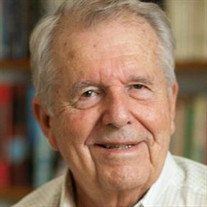 Please click HERE to listen to the entire memorial service.

Dr. William A. Pruett, 92 of Beloit, WI died on Sunday, October 7, 2018. His wife of 64 years, Lorraine preceded him in death in 2014. His brothers Edward and Harold also passed away before him.

William was born to missionary parents in Saigon, French Indochina (Vietnam) in 1926. He lived in Vietnam until the Japanese occupation, leaving in 1941. On his eighteenth birthday he was denied enlistment to US Army due to a heart murmur; however, he passed his physical for the Merchant Marines and became a radio operator during World War II. After the war, William sailed every summer paying for college. After graduating from Wheaton College (Illinois) in 1949, he married Lorraine E. Johnson in 1950. He then received a draft notice and his heart murmur had disappeared, so he had the opportunity to serve in the US Army during the Korean War. After his discharge he went to medical school at Baylor College of Medicine, Houston, TX and subsequently post graduate training at the University of Michigan.

In 1960, William and Lorraine moved to Beloit, where they lived happily ever after. They raised their family, were active in the Peoples Church and Rock Valley Chapel. He had a busy family medicine practice for over 30 years in Beloit; during that time, he delivered many babies, performed surgery, and treated families and individuals. He was active in development of many community medical services and programs. Likewise, he mentored and taught many medical professionals and always pursued more learning. After retiring in 1991, he continued teaching and training family medicine internationally, maintained regular contact with missionaries, international students at Beloit College and his children and grandchildren.